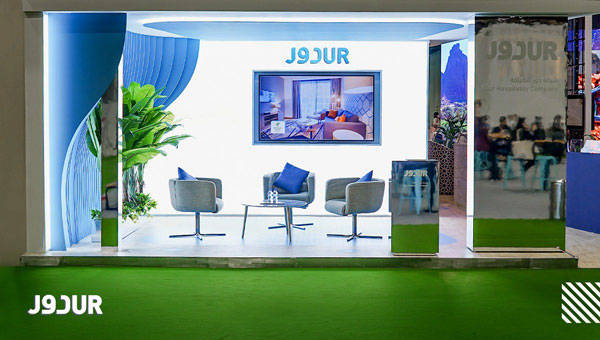 Dur’s CEO Mr. Sultan Al Otaibi stated that Dur’s participation at ATM comes at an unprecedented time in the history of the hospitality industry on the global and local fronts, and offers an opportunity to feature the attributes of the Saudi hospitality sector and confirm its agility in keeping pace with current developments. He also commended the Saudi Tourism Authority (STA) for its vital role in actively engaging the industry in international forums which further promotes the global positioning of Saudi tourism, and its vital mainstay the hospitality industry, and supports their contribution to Saudi Vision 2030 and its goals of creating a diversified economy and a thriving society.

Mr. Al Otaibi further stated that Dur Hospitality's approach of revitalizing Saudi hospitality through strategic investments and property upgrades across the Kingdom has remained unaltered despite the shockwaves that have rippled across the world in the wake of the pandemic. “Throughout the pandemic, Dur pursued its growth plan, inaugurating new properties and expanding or renovating existing ones; at the same time, we focused on enhancing our operational capabilities through continuous development and adoption of the latest technologies.”

Mr. Al Otaibi added: "Participating in this forum has offered Saudi hospitality the opportunity to showcase its substantial prospects and identify promising investment opportunities, in light of the anticipated growth in hospitality projects all over the Kingdom in the coming years.” He further indicated that ATM is a pioneering platform to exchange global expertise and overview the latest developments and technologies adopted in the hospitality and tourism sector, especially during the post-pandemic phase.

Consolidating its longstanding position as a pioneer of Saudi hospitality, Dur unveiled its post-COVID recovery plans announcing a set of ambitious upcoming expansions and enhanced services to serve post-pandemic guests' needs and cater to the expectations of the new market segments. In this regard, President of Hotel Operations Mr. Hassan Ahdab stated that the Saudi hospitality industry has demonstrated great flexibility in coping with the challenges imposed by the new reality. He added: "Dur Hospitality has been swift in its crisis response as well as its recovery plan. We have been pursuing several projects which reflects Dur’s resilience and robust business sustainability, as well as its adept procedures enabling it to adapt its operations to the ongoing changes and continue to exceed visitors' expectations.” Mr. Ahdab announced that the ongoing expansion projects would add a total of 3,441 rooms to Dur's portfolio.

As part of its expansion plan, Dur will support the anticipated growth in religious tourism in line with the national vision to accommodate more pilgrims by 2030. As such, it has fully revamped Makarem Ajyad Hotel (Makkah) featuring modern designs and the latest technologies. In parallel, Dur will focus on supporting the anticipated growth in the Saudi capital, in line with HRH Crown Prince Mohammad bin Salman's plan to position the city as one of the top 10 business hubs worldwide. In 2020, Dur launched the expansion project of the Riyadh Airport Marriott Hotel adding 93 rooms to its portfolio, in addition to following with the complete remodeling of Crowne Plaza Riyadh Palace Hotel. In addition to these projects, Dur’s portfolio also includes several new projects and expansions under development in the cities of Riyadh, Jeddah, and Madinah.

Furthermore, Shada Hospitality, a subsidiary of Dur Hospitality, has introduced Shada Al Shatea in Jeddah, featuring a distinctive design blending modernity with authentic Saudi heritage and offering a hospitality experience transcending the limitations of space and time and delivering an integrated, individualistic experience. Additionally, Shada Hospitality launched Qurtoba by Dara in Riyadh, its latest young, tech-savvy brand with a local charm that will offer guests a unique stay through its 59 tech-powered apartments.

In this regard, CEO of Shada Hospitality Ms. Reem Garash declared that the hosting of the ATM event this year is well-timed as it heralds a positive message of the recovery of the tourism and hospitality sectors.  “We are very proud to be gaining the confidence of our guests as we see growing interest in the Shada brand. Shada, which reflects genuine Saudi hospitality, is becoming more popular among guests with higher satisfaction rates recorded, and we are keen to protect this trust by maintaining a high service level throughout our operations.”

Ms. Garash further indicated that Shada Hospitality’s other brand Dara, launched in 2020, has also been well-received by guests, adding that the company plans to expand its reach throughout the Kingdom. Shada Hospitality currently has 790 rooms under development which are set to be operational soon.

It is worth noting that ATM is organized this year under the theme “Tourism for a Brighter Future” as 2021 is anticipated to usher a new dawn for travel and tourism. Dur Hospitality is attending the event through a standalone booth alongside its participation as part of STA’s delegation.