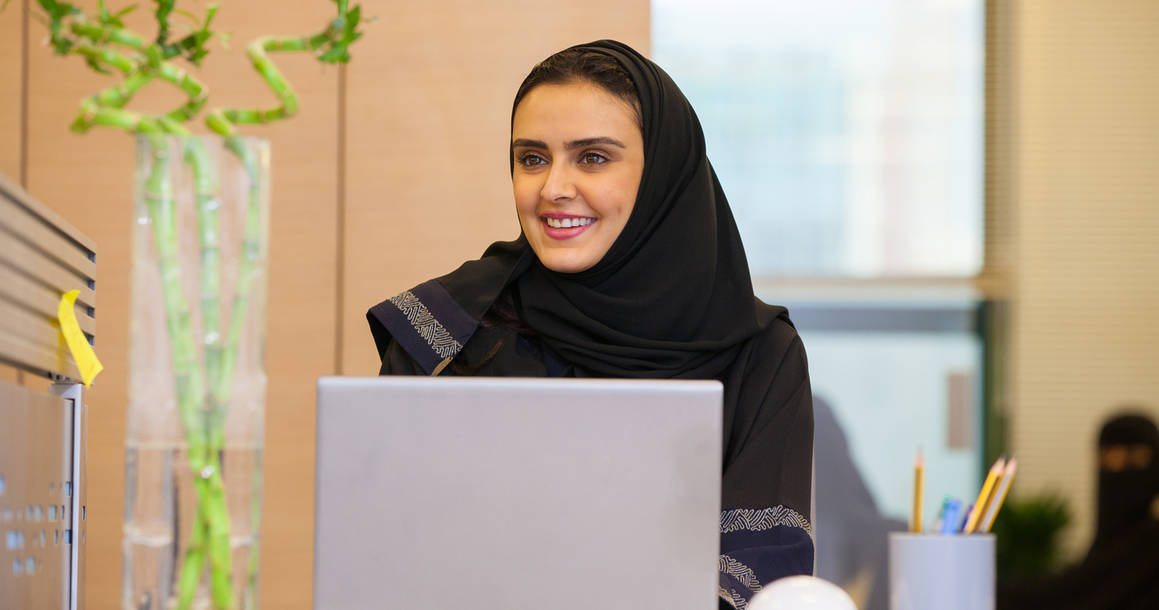 Saudi working women have become a remarkable driving force that is contributing to the expansion of the Saudi labor market. This prominence emphasizes the importance of women as key players within developed societies. This is not a new assertion, since Saudi women’s work has been classified as a crucial issue that gripped the attention of large sectors of society, and is continually addressed by the media as a multi-pronged subject, in aims to educate people on the importance of women’s work and its effective role in advancing society.
Government and private entities have started to employ women in a progressive and intensive step that aims to regulate the role of females in the economic development process, in accordance with specific regulations and legislation designed to support the targets of the Kingdom’s ambitious Vision 2030.

The history of Saudi working women… the nurturers of future generations
The positive results of an astute vision adopted by the Kingdom’s leadership have started to evolve, shedding light on Saudi women’s successes and achievements throughout history. Women’s education and empowerment efforts are being reflected through a continued pursuit to develop women’s education, beginning with the establishment of girls' Koranic schools in several Saudi cities and villages by order of the Kingdom’s founder, followed by the efforts of his sons to establish schools, colleges, and universities offering various disciplines. Furthermore, numerous female students are benefiting from scholarship programs offered by the Ministry of Education for undergraduate and postgraduate studies in various countries around the world.
The active participation of Saudi women in practical life has been clearly reflected through the implementation of the Royal Vision under the leadership of the Custodian of the Two Holy Mosques King Salman bin Abdelaziz Al Saud and His Royal Highness Crown Prince Mohammed bin Salman bin Abdelaziz.

Women within Vision 2030
Vision 2030’s mission statement includes: “Saudi women are an important component of our strength, constituting more than 50% of the total number of university graduates. We will continue to develop their talent, invest their energies, and enable them to have the right opportunities to build their future and contribute to the development of our society and economy”…
Women’s participation in the labour market and the utilization of the local female labour force will assert women’s role in the Saudi market in aims to promote the economy. Continuing to develop women’s talents and investing their energies will inevitably strengthen their position in decision-making posts and career hierarchies, and will also enhance their contribution towards the development of society and economy. This forms one of the main pillars of the Kingdom's National Transformation Programme 2020 and Vision 2030, which aims to increase women's participation in the labour market by 30%.

Empowering women as pivotal partners in development
The process of empowering Saudi women has displayed significant milestones at social, economic, and political levels, starting with the encouragement of women’s education, enabling women to work in various professional fields, and granting them the opportunity to fill notable positions such as members of the Shura Council, university presidents, vice-ministers, and more.
On the other hand, Saudi women’s work will contribute towards reducing the unemployment rate from about 12% to 7% by 2030, which will positively impact the Kingdom’s localization strategy and support its efforts to invest in, train, and qualify male and female national talents and support the growing needs of the Saudi market.

A glance at the private sector: Dur Hospitality
To support the Kingdom's aspirations and ambitions, the private sector has adopted the same values to support Saudi women through offering opportunities that enable the effective participation of females in developing society. Numerous companies have started recruiting female Saudi talents who possess outstanding expertise. Dur Hospitality is one such company that has implemented Saudi women’s empowerment and development plans in the hospitality and hotel sector. Throughout its 40-years of operations, Dur has strengthened its local expertise by raising localization rates and employing women in its properties on an ongoing and accelerated basis. At the beginning of 2018, the number of female employees at Dur was 61, a figure that grew to 116 by the end of the year, forming an increase of 115%. Dur’s localization strategy plans aim to achieve a gradual increase in female hire and localization rates throughout its various departments by 2020.